First, they are about something.

Second, they represent the world as being a certain way.

Much work has been done on giving semantics for various sorts of linguistic representations. Whole classes of sentences have been given rigorous semantics. For instance, famously, modal language has been given a whole semantic theory, rigorously formulated in terms of mathematical models involving possible worlds.

Arguably, something similar can be done for pictures. 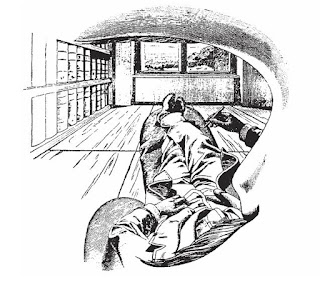 Mach's picture of the visual field

This is obviously simplifying hugely and leaves a host of questions unanswered. But it allows us to get a preliminary grip on things.

You can think of visual perception as giving you a picture, where the picture includes such properties as {OBJECT, SHAPE, MOTION, COLOR, DISTANCE, SPACE, TEXTURE, CAUSE, AGENCY}. All of these properties are represented in visual perception (and, with most of them, in pictures too, at least generally).

However, that doesn't need to stop us from thinking of hearing as presenting an auditory "picture," at least if we understand "picture" as picking out a general representational structure that is in some way common to normal, physical pictures and our mental, visual images. After all, as we said before, we can think of the visual image as a picture representing such properties as {OBJECT, SHAPE, LOCATION, MOTION, CHANGE, COLOR, DISTANCE, SPACE, TEXTURE, CAUSE, AGENCY}. But then maybe we can also think of hearing as giving us an auditory representation, structurally similar to the visual image, but instead representing such features as {OBJECT, LOCATION, MOTION, CHANGE, DISTANCE, SPACE, CAUSE, VOLUME, PITCH, TIMBRE}. We might even be able to include SHAPE and AGENCY in there in some cases (almost certainly in the case of bats), though I'd have to double-check the scientific literature.

In other words, the perceptual "structure" could remain the same between visual perception and auditory perception, and indeed, some of the qualities that are represented in vision may be represented in hearing, and vice versa. For instance, just from what I've listed, the intersection of properties represented in hearing and vision will include such features as {OBJECT, LOCATION, MOTION, CHANGE, DISTANCE, SPACE, CAUSE). On the other hand, maybe it is unique to vision to include {COLOR, TEXTURE}, and maybe it is unique to hearing to include {VOLUME, PITCH, TIMBRE}.

But again, despite the differences in features that are represented in hearing and vision, the overall representational structure might be, generically, the same at a certain level of abstraction.

What would be interesting would be to work out a precise semantics for visual perceptions and a precise semantics for auditory perceptions and see where, in the details, the two actually differ. Obviously hearing and vision will have their accuracy conditions assigned by different systems of depiction. But it's exciting to think that the two might not be so far apart, that they may, structurally speaking, having a lot in common, and that light might be shed on both by looking at conventional, physical representations (such as pictures, recordings, etc.).
Posted by awatkins909 at 11:21 PM