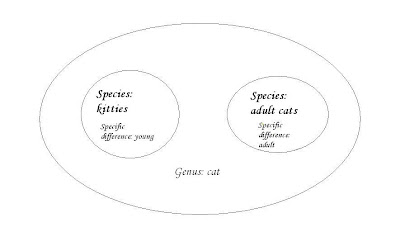 In attempting to define things we can end up with a large amount of vagueness. For example, take the case of a kitty. When someone asks "what is a 'kitty'?" it is clearly insufficient to simply list properties which hold truly of it. For instance, in reply one might say that it is something small, furry, and cute. This would all be true. But that doesn't really help us to get at what a kitty is, does it? What we need here is not a mere nominal definition. We need a real definition.

The most precise and clear way of getting to a real definition is by what is called "genus-species classification". One must not confuse this with something like "biological species" which are these days based off of evolutionary lineage. In terms of giving real definitions of things, it usually has very little to do with that. The easiest way to understand this is with set theory and venn diagrams. In terms of set theory, a genus is just a type of superset and a species is a type of subset. A superset counts as a genus when all of the members of its subsets share certain particular attributes in common. A subset counts as a species when its members all have some special attribute which demarcates them from the members of the other subsets. This difference is called the "specific difference". So with the case of the kitty, the genus is "cat", since kitties have all of the attributes necessary to be included in the genus (superset) of cats. However, a kitty is different from other cats insofar as it is young. So the specific difference is the attribute of its youth. This creates a separate species from other cats, such as adult ones who have the specific difference of mature age. Maybe the venn diagram above is illuminating.

So to get a real definition of kitty we take the species and genus, giving us "young cat". Hypothetically, one could do this with any given natural kind of thing.
Posted by awatkins909 at 11:09 PM

I think you're misunderstanding the Aristotelico-Thomist contention: since a kitty and cat both share the same substantial, quidditative form both fall under the same species. "Imperfect" (young) and "perfect" (mature) do not modify a genus as differentiae.

I also think your application of set theory here is rather inapt: a genus represents the very essence of the member of a species, albeit in an unmodified and incomplete manner. The same relation does not hold, at all, between a set and its elements.

Those are some rather testy-looking remarks. I actually agree (I think) with the basic gist of this post, so I don't want to give off the wrong impression. I mean this criticism in the spirit of dialogue and genuinely hope to see more of your work in the future.

Thanks for the help, Leo.

With regards to first point, I understand that a kitty is in no way essentially different from a cat. But if we want to give a specific and unambiguous definition of what we mean by "kitty", genus-species classification can still be useful, no?

I'm actually kind of skeptical of the formalization of it by sets as well, and I was considering deleting this post because I now don't like what I said. But I think we can still find some value in the use of classes instead.

If we use these definitions and understandings, I think we can better formalize the relationship between a genus and species, although this may not be so useful in helping us to decide the relevant properties of members.

So I think there's still something to be said for all of this. Thanks for visiting and commenting! :)

I'm not sure I understand your reply to my first point. A definition, for Aristotle or an Aristotelean, just is a signification of the essence of the defined. Since a cat and kitty do not differ in essence, it follows that they cannot, strictly speaking, differ in definition. You can use the classical genus/differentia system to distinguish kitties and cats, if you like, but just be aware it is not quite how Aquinas & Co. do.

I'm still not happy with our attempt to formalise the genus/species system by way of set (class) theory. The crucial point about a genus is that it represents the whole essence or quiddity of a thing, albeit in an unmodified and incomplete manner. A set S, however, just cannot be signify its element e, qua member, in any form whatsoever (unless it's a singleton and you think singletons are identical with their members). Classes and sets, moreover, are as such going to have their elements related to them in an accidental manner, whereas species are related to their respective genera essentially. Best just not to go there, I think.

BTW, I have my own blog over at Dormitive Virtue, if you want to check it out. (I think we share many of the same interests.)

Re: Aristotle's categorical logic. I'm a bit hazy on the relevant passages, but I don't remember Aristotle ever committing himself to anything analogous to set theory. "All men are mortal," unless I'm severely misremembering, is the affirmation of a predicate of a universal and is certainly not a set-theoretic move.