I wrote most of this post several months ago when my friend Calum Miller came to southern California for a semester abroad. Unfortunately, I simply never got around to finishing it up. Hence, this post comes about five or six months late. However, I still think it's worth posting, in case someone watches the video or comes upon the type of fallacy that I suspect goes into the argument. Here's the post:

A couple weeks ago I went to a debate between my friend Calum Miller and philosopher Greg Cavin on the Resurrection of Jesus. The video can be found here. Cavin's opening speech on Bayes starts at (6:00). He gets into his arguments again at (13:40). In this post I'll discuss a small part of Cavin's opening speech.

At the beginning, Cavin claims that he will show that it is "virtually 100% certain that no miracles ever occur."

In general, the Odds Form of Bayes' Theorem is as follows. For any events A, B, and D:

Cavin comes up with a partition of probability space which is exhaustive and exclusive. In other words, at least one of the following hypotheses holds and if one holds then the others do not.
With respect to L, what it is saying is that if you have a law of science 'S,' then a statement of the law will just be of the form: "For all times, all places, S," rather than "Except for the intervention of some supernatural force, for all times, all places, S." In other words, laws of science lack the underlined "proviso."

M and L are taken to be incompatible because if a miracle occurs, i.e. if M is true, then that entails the failure of at least one "un-provisoed" law of science at some time and place, whereas L entails all "un-provisoed" laws of science hold at all times and places. Cavin defines the evidence E with respect to which we will evaluate these probabilites as follows (27:00): 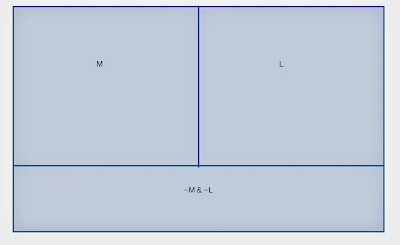 The partitioning of probability space.

Applying Bayes' Theorem to the argument at hand, this is the Ratio of Posterior Probabilities of L vs M:

After the talk, I asked Cavin why he thought M could not explain C and T as well as L could. In other words, why are, say, the confirmation instances of science less likely given that miracles have occurred than if L holds? He said, "Well, if I told you, 'This is a desk,'  what would that explain? Not much. How can you make any predictions from that? So, likewise, how can the proposition that at least one miracle holds explain anything? It could hardly have any predictive or explanatory power." Of course, that seems true. If the only sentence you knew to be true were "At least one miracle occurs," then you wouldn't be able to predict much, just as you couldn't predict much from just knowing "This is a desk." Hence, the argument goes, P(E|M) is very low.

However, it's a little bit misleading to put things this way. P(E|M), strictly speaking, isn't defined in terms of how much you can predict from the single proposition that at least one miracle occurs. This is clear after considering some very basic probability theory.

First, note that we can always define P(M) as P(M∩A) + P(M∩¬A) for any event A. This can clearly be seen by the following diagram: 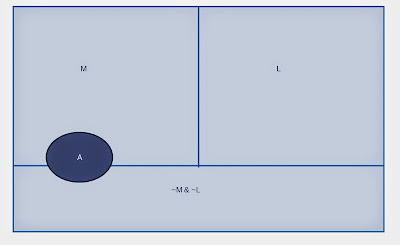 From this we can infer: P(E|M) = P(E|M∩A) + P(E|M∩¬A). Now, you might still think that this is lower than P(E|L) for various reasons. But you certainly couldn't infer it from the type of argument I sketched above. That would be much too easy.

Maybe I am misrepresenting what Cavin said. I hope I'm not. But if I am, let's just say that if someone were to argue in the way I represented Cavin as arguing, then they would be committing a fallacy.

There were many other interesting issues that came up during the debate, such as the likelihood of the laws of nature holding most of the time given theism, and these deserve attention. But for now I think it's worth noting that Cavin's argument doesn't go through as easily as it might have seemed.
Posted by awatkins909 at 7:59 AM

When a Christian starts using complex mathematical formulas and philosophical theories to defend his belief in first century corpse reanimation-transformation (aka:
resurrections)…I yawn.

I yawn because it is soooo silly.

I know for a fact that if a Muslim attempted to use these same ploys to defend the veracity of Islam’s claim that Mohammad flew to heaven on a winged horse, the very same Christians would snicker and hand-wave away these arguments without giving them a second thought, believing that these tactics are nothing more than an obvious, desperate attempt to dress up a superstition as believable reality.