"Whatever is Moved is Moved by Another"

In this post I am going to try to defend Aquinas's First Way, specifically against the attacks brought against it by my friend Alex. Alex has written a fine explanation and critique of Aquinas's first and most famous Way, the argument from motion. The paper can be found here. Unlike many attacks on Aquinas's argument, Alex's reading of Aquinas is sympathetic and charitable, and thus at the same time his criticisms are incisive and well-taken. Anyone who wants to fully understand my post should read Alex's paper first; nevertheless, I will summarize some of his most important results.

To be specific, I'm going to defend Aquinas's premise that whatever is moved is moved by another, which we shall call (MOV). I do not claim that Aquinas ever made the defense I am making. In fact, I think the argument I give is in some respects new. But when all is said and done what I am concerned with is whether Aquinas's premise is defensible and true.

First of all, Alex points out that the term 'motion' in scholastic philosophy really means change. And to say that an object is changing with respect to some feature P is to say that it is going from being potentially P to actually P (more on this terminology here). I will take this for granted in everything I say about change. Now, in summary, Alex's main objection to Aquinas's defense of (MOV) is that either it is (a) valid but palpably unsound or (b) all its premises are true yet it is invalid, i.e. does not prove the premise (cf. his paper for details). However, Alex does think that Aquinas can defend the following more modest premise, which David Oderberg attributes to Aquinas:

(ACT) If something changes from being potentially F to being actually F then there must be some actual being that initiates this change.

The problem is that the more modest and highly defensible premise (ACT) is not equivalent to (MOV), leaving (MOV) undefended and the First Way ultimately uncompelling.

Before I present my argument in favor of Aquinas's (MOV), we need some definitions. First, the definition of an external object, (EXT):

Let's also define what I will call the notion of change per se. (This is my own terminology.) Intuitively, something changes something else per se if it is the most immediate and fundamental efficacious cause of the change, [or the only sufficient cause such that you can't get any 'closer' to the change]. For instance, my hand pushes a stick which pushes a rock; the idea is that the stick, specifically its tip, is what changes the location of the ball per se. Here is a somewhat more formal definition of changing per se, which we will call (CPS):

This definition can be made more precise, but the concept should be somewhat clear. The idea behind what I've called change per se is that whatever changes something else per se is the thing that changes y in the most immediate sense and a sense more proper than other things. So, for instance, take the following objects: Me, my arm, my arm's atoms, and a stick. When my arm changes the location of the stick, I can be said to change the location of the stick; however, I cannot be said to change its location per se, since, arguably, if somehow my arm persisted in its motion without the rest of my body (maybe by a miracle it was detached and could float, pushing things around), it would still be sufficient for the stick's changing with respect to its location (contra (ii)). On the other hand, arguably, my arm, or at least some part of it, changes the stick's location per se by its motion, since clearly it can be said to be changing the stick's location, thus satisfying (i). It arguably satisfies (iii) for the reasons stated, and it arguably satisfies (ii) since intuitively if you removed most of the arm but left a chunk of it or a few of its atoms, and they did the same thing as they did when my whole arm's motion occurred, then they would not be able to bring about the stick's change of location.

Now maybe you will disagree with my example and say that given my definition the arm does not change the stick's location per se. But the example is simply to illustrate what I'm trying to get at. If you deny the example is an example of change per se then you should understand what I mean. Also, I would not be surprised if my definition requires chisholming; nevertheless, I think it is on the right track, and helps get my point across. What is most important is just that we have some intuitive understanding of what I mean by something's changing something else per se.

Now we need the following premises. I will translate them into predicate logic, and from my translations it should be clear which formulas correspond to which English phrases.

(2) For all x and y, if y is actual and x is changed per se with respect to P by y, then y is either an object external to x or y is a proper part of x.

Let's examine whether these premises are plausible or not. 4, 5 and 6 can easily be shown to follow from the definitions of 'change per se', 'external object', and 'proper part' respectively, so I will not talk about them any more. 1 is basically just a more precise statement of (ACT), so I won't say too much in its defense, but the premise is eminently plausible: Upon a small amount of reflection it is simply obvious that what is merely potential cannot have any power to bring about something actual. Merely potential chemical reactions do not bring about any actual chemical reactions. So the only thing which can bring about something is something which actually exists, and doesn't merely potentially exist.

The crucial premises then are 2 and 3. 3 is quite plausible on the face of it. For surely if something is changed at all, then there is something which changes it in the most immediate sense i.e. changes it per se. There must be some most immediate explanation or cause of a change right? If there isn't, then the change can never come about. This seems intuitive enough.

(The intuition is this: There seems to be some sort of infinity problem here, though the problem isn't with an infinite regress but rather with what we can call an infinite "progress" of causes. If there is no immediate cause, there has to always be another cause that's "closer" to the effect, but never one that actually "gets" to the effect. If it isn't clear what I mean I can elaborate.)

Suppose to the contrary that the cause x of the per se change in y with respect to P is not one of y's parts and is not something external to y. Then since clearly whatever is not a proper part of y and is not external to y is identical to y, it follows  x = y. So y brings about a per se change in y. Now either (a) some of the parts of y bring about the change in y or (b) none do (either way, definitely no parts bring it about per se, as per our assumption).

So much for premises 1 and 2 then. Now, given that all the above premises 1-6 are true we can prove:

(7) For all x, if x is changed with respect to P by some y, then x is changed by some z non-identical to itself. 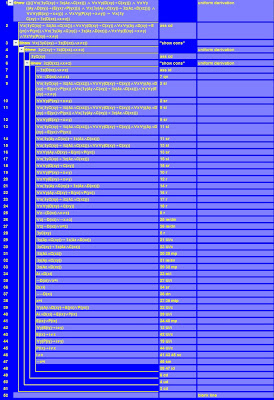 [Note: If you can't see the proof, right click and either open in a new tab or else save the image and zoom in with some image viewer. I did the proof rather quickly so it is not the most elegant and could be done in fewer steps, but it gets the job done.]
Posted by awatkins909 at 1:15 PM

I like what you've done here and it certainly seems like you must be on the right track. I'm not too clear, however, on how "The idea behind 2 is that some things can truly be said to bring about changes in themselves in some sense, but they can't be said to bring about per se changes in themselves; properly speaking, it is the parts which are bringing about the change in the whole." responds to Alex Yusif. It seems like his point is that if the thing (as a whole) has P as a power, then that by definition means it can bring about P in something, and--since it has P in a different respect that it fails to have P--it can just as well reduce itself from "virtually and potentially P" to "actually P."

I think the response has to be that to have P virtually is to have P actually but not improperly or something like that (please Chisholm away).