One More Reason Why Russellian Descriptivism is False

Russellian descriptivism about proper names can be summarized rather roughly in terms of the following four theses. For any object O, where 'O' is a proper name of O:


(1) There is a unique definite description D associated with the term 'O'.
(2) The speaker believes that D is uniquely true of O.
(3) D uniquely picks out O.
(4) The proposition expressed by "If O exists, then O is D" is knowable by the speaker a priori.

So, very roughly, in the case of Barack Obama one might associate with this name the definite description 'the president of the United States from 2008 to 2016' and believe that this picks out Barack Obama uniquely; this is how one refers to Barack Obama, by means of the associated description.

There are many excellent reasons to believe a theory like this is false. Kripke, Donnellan, and others have pretty much put it to rest. But one more reason is that it entails another false thesis known as the identity of indiscernibles (or at least a somewhat modified and equally false version of this thesis). The identity of indiscernibles basically states that if two things share all the same features then they are the same object. [On the falsity of this thesis, check out Max Black's famous paper.]

The basic line of reasoning which leads me to say descriptivism of the described sort entails this principle is, informally, as follows (taking Barack Obama again as our example): By clause (3), 'the president of the United States from 2008 to 2016' uniquely picks out Obama; and by Russell's analysis of definite descriptions it follows from this that anything having the feature *being the president of the United States from 2008 to 2016* will be Barack Obama. Now, suppose two things x and y both have all the same features, and x has this feature. Then so does y. But since anything which has this feature is Obama, y is Obama. We can apply similar reasoning in any other case, since by (3) everything will have a feature P which uniquely picks it out, so if two things x and y have the same features then both of them will have P, and thus both will be identical to x.

There are two qualifications to be made. First, there is a sense in which the identity of indiscernibles can be trivially true. If we include among the features of a thing x the property *being identical to x* then it is obviously and trivially true that two things having all the same features will be identical. Even excluding features such as these the argument still goes through though, since presumably on a descriptivist theory the relevant description for, say, Barack Obama is not going to be 'the thing which has the feature of being Barack Obama'. Descriptivist theories aim to not be blatantly circular.

For those not satisfied with my rather informal "proof" I've made a more formalized proof (with cheap symbols and lines, since OpenOffice does not appear to have any quantifiers). It should be pretty easy to interpret but if not please tell me. The first premise says for all x, if x is nameable, then there is a feature P such that for all y, if y is P then y = x, and x is P. The conclusion states that for any two nameable objects x and y, the identity of indiscernibles holds. Hence, if I have made no mistakes, descriptivism entails a restricted but still false identity of indiscernibles. 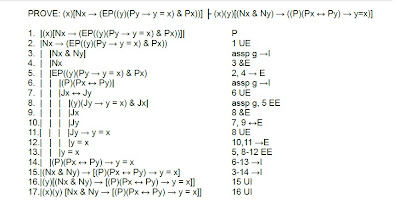