Naturalness in the World

I'm currently taking a course on a newly concocted discipline in analytic philosophy called metametaphysics. For Aristotle or Aquinas the topics grouped under this heading would probably just fall under the science of metaphysics. We are primarily reading from the recent Chalmers volume and Ted Sider's new book Writing the Book of the World. In the latter book quite a bit turns on a distinction which Sider calls variously 'naturalness', 'fundamentality', 'structure', and 'carving at the joints'. My professors claim to not understand what Sider is talking about. Admittedly, Sider could be quite a bit more clear. However, I think that an Aristotelian would want to agree at least in some respects with his general point insofar as we'd admit some boundaries in reality to be privileged over others. 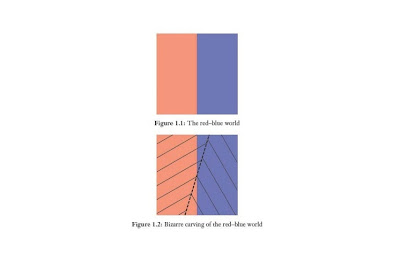 Consider an example Sider gives which is represented in the figure above (I'll paraphrase these examples a little bit). Suppose there is a world filled with red and blue liquid. There are many true ways that we can divide this world up when we describe it. We can divide it into those parts satisfying the normal understanding of our predicates 'red' and 'blue' as in the first figure. We could also divide it into those parts satisfying different predicates, call them 'bled' and 'rue', which correspond respectively to the portions left and right of the diagonal in the second figure. Both of these ways of describing the world are true. There are indeed bled and rue portions of the world just as much as there are red and blue ones; or, to put it another way, there are divisions of the world along the lines of both the first and the second figure. Yet the first way of speaking seems in some way to be natural while the second seems bizarre. Sider wants to assert that the first way of dividing up the world, i.e. dividing it up along the lines of our 'red' and 'blue' predicates, is better because it describes those features of reality which are in some way privileged; to put it in his terms, it describes those features which are natural/ fundamental/carve at the joints/are part of the structure of reality.

It seems like Sider gets a lot of his account from David Lewis's work. It is at least similar to the natural vs. non-natural distinction Lewis makes in his paper "New Work for a Theory of Universals." Consider two properties: being green and being grue, where grue is defined here as the property of being green and observed before 3000 A.D. or blue and not examined before 3000 A.D. This property which we have called grue appears "gerrymandered" in a way the property green is not. In Lewis's term grue is a "less natural" property than green is. Sider agrees on this point with Lewis. It should be noted that what makes grue a less natural property is not the syntactic complexity of its definition--after all, we can just give it a simple name like grue--but rather that it is in some way privileged over these other properties as being a more fundamental feature of reality. (Lewis may actually disagree here but I think his view is highly implausible and Sider does not seem to endorse it.)
Take a final example. Consider two classes of things: the electrons, and the electron-or-cows (EoC's), the latter class consisting of everything which has the property of being an electron or a cow. The things in the first group seem to go together quite well in a way which the objects in the latter group do not. The electrons do not go together better simply because they share many properties. For one, the EoC's share many properties. In fact, the EoC's share infinitely many properties: they each have the property of being an EoC or four feet long, the property of being an EoC or five feet long, the property of being an EoC or six feet long...and so on.  So it's not simply the number of properties shared which distinguishes the two. It's the fact that a grouping of things into electrons and cows gets the way reality fundamentally is, whereas a grouping of things into electron-or-cows does not.

So these are just a few examples where we can contrast fundamental/natural features of reality in opposition to gerrymandered or non-natural ones. It is necessary to use such illustrations since fundamentality is taken to be a primitive distinction which is likely not definable in more basic terms. There are a lot of questions that can be asked here: is fundamentality/naturalness/carving at the joints/structure of reality/etc. itself fundamental? Is fundamentality supposed to be a property? Is fundamentality a feature of our thoughts and concepts, of entities, or both? What is fundamental? How can we know? Is the same notion at work in each case? These are all good questions, some of which are discussed in the book.

However my primary concern is this: Is Sider really getting at some objective distinction or not? What I mean by 'objective' is whether his distinction between the fundamental/non-fundamental really corresponds to something in the external world. Personally I think he is onto something and makes an interesting case regardless as to the connections with Aristotelianism. However, I think an Aristotelian would want to admit the distinction even if he might disagree about what the fundamental things are. I will try to explain why in later posts.

If anyone is reading, I'd especially like to hear your thoughts on (1) whether you think Sider's distinction makes any sense and (2) whether the examples illustrate the point.
Posted by awatkins909 at 11:17 PM